[WEDNESDAY 28 APRIL 2010]
Another good day: no faffing, no computing, no procrastinating. Just good honest hard werk, with the odd tea break from time to time.

I spent the morning tensely neatening the outlines of the ‘electric blue drip’ and the red ‘Amour’ on “Love is… in French”. 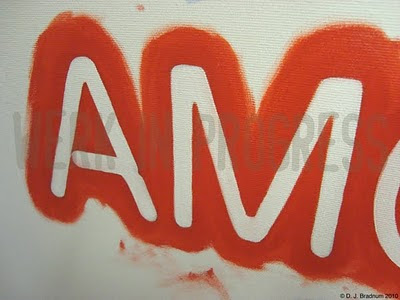 Then it was time to start werk on another drip painting: A mixture of cobalt violet and cobalt blue as a base; white-out the neon strip/drip; splash some lemon yellow down the rest of the canvas… Then I had to vacate the loft due to excessive turpentine fumes...
These drips are hard werk! I have them hung on the wall, so I’ve been standing on a brick to reach the top of the canvas, and kneeling on the floor to get to the bottom.

And then there were two: 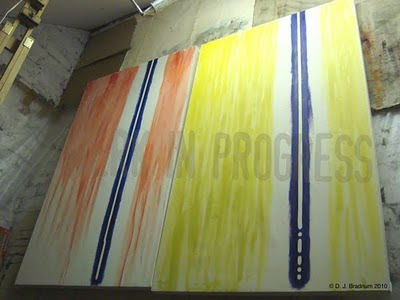 Still some time, but everything is wet… I return to the “rock-face”, a place I haven’t visited for some time. It has been hung in the lounge and has come under casual scrutiny 2 nights a week, with the odd glance as I watch the telly or read. I feel ready to take it in hand… 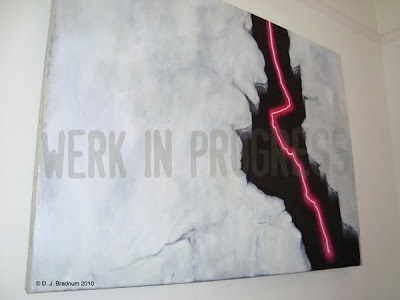 I finish the day aching and spent. It has been a good day. 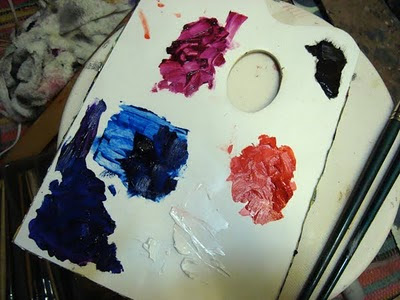 Email ThisBlogThis!Share to TwitterShare to FacebookShare to Pinterest
Labels: Confessions, Tools of the Artist, Werk In Progress

Exhibition FINAL WEEK everything must go!

This week is the final week of my exhibition of neon paintings at the Caroline of Brunswick.

So if you still haven't popped in for a quick look, this is your very last chance. They will be there until last orders on Wednesday evening. And then they will be gone.

[WEDNESDAY 21 APRIL 2010]
Today was a good day. I can always tell a good day because I don't find the time to turn on the computer and type away with my musings and moanings. I arrived to find 'SMILE' looking good, and so I moved it, and the equally large 'Wish You were Here', out of the way. Decks cleared I was ready to begin some new paintings...

It started with projections - a series of parallel vertical lines of varying thickness to choose from: 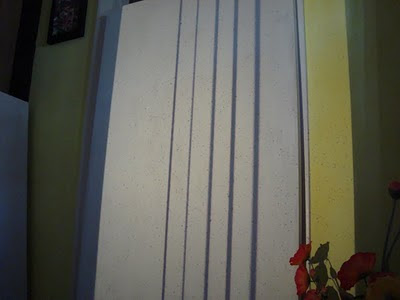 I traced out a single line on 2 canvases for a pair of neon 'drip' paintings. I envisage them appearing like a single droplet of effervescent liquid running down a vertical surface, bisecting the canvas in a kind of homage to Barnett Newman's 'Zip'.

This one will have an electric blue drip. I washed some Vermillion paint down the two halves to break down the blank canvas areas. 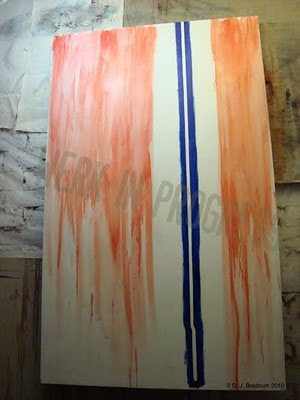 I spent the rest of the afternoon painstakingly whiting in the blue neon letters and smoothing the outlines of 'Love Is Amour...' 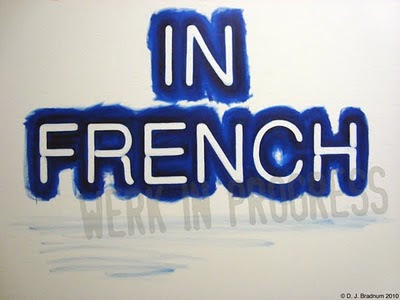 [WEDNESDAY 14 APRIL 2010]
I return to the loft to find my rash decisions with ‘SMILE’ hadn’t rendered it unworkable as I had feared. No, it’s nowhere near as bad as I thought it was when I left last week. 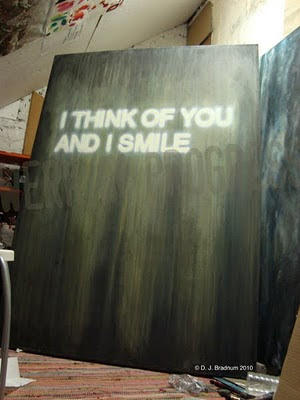 I have a yearning to add some sort of crack across the wall, so I now find myself sifting through photos on this old Mac trying to find one I’ve taken in the past year of a cracked wall which has since been knocked down.

In other news: I have been graced with a stinking cold, which isn’t helping me get things done. I also received my first neon light in the post – a kitsch/naff pink neon Playboy bunny. What can I say? It was very cheap, and will be ultra-helpful for reference purposes – another ‘tool’ for ‘the artist’. It also lends the place an air of seediness. 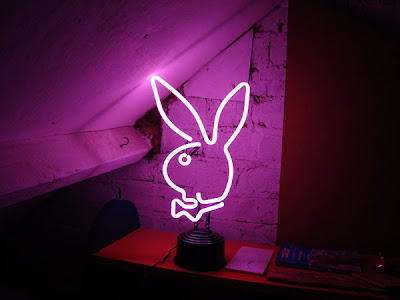 I never found the cracked wall photo – I had to give up and do some actual painting. Frustration took over and a bottle of water was poured and trickled down the surface. It may not have helped progress but it has eradicated a massive chunk of preciousness that had mounted up over the werk I had already done on this painting... 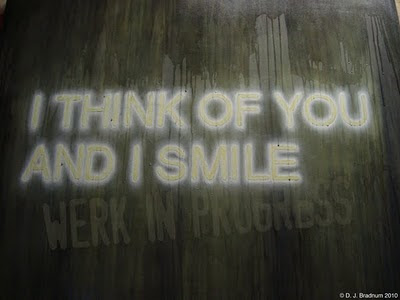 Later: At last, ‘SMILE’ is beginning to look the part, but I must crack on if I am to finish today. I have a deadline to meet: There is a competition I want to enter, the closing date is tomorrow.

Out comes the sandpaper… Then the fingers, rubbing in paint… Then the brush, more paint, knocking it back… I take the beast outside to get some distance: there are flaws that need attention. It falls over, flat on its front, NOoooooooooooooooooooooo!

Off comes the masking fluid… More white paint, this time delicately brushed to give a little more faint glow. I also touch up some water-marks around the lettering. Then it’s outside to be photographed: SMILE! 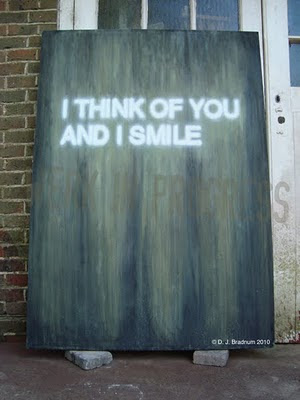 Email ThisBlogThis!Share to TwitterShare to FacebookShare to Pinterest
Labels: Confessions, Crap Photos, Tools of the Artist, Werk In Progress

[WEDNESDAY 07 APRIL 2010]
I have no camera today – so there will be no crap photos to decorate this post. I hardly slept last night and was awake at 7am. It has been a struggle, but I werk on.
I gave myself an easy start searching for white neon images on t’internet for reference purposes. It is hard to paint neon out of the imagination, so it helps to have some pictures to refer to to see how the neon lights up its surroundings.

I hauled ‘SMILE’ out into the loft, which was no mean feat. I added some of that chalky white glow and rubbed it back. The letters stand out effervescent and bright, but the background now looks flat and unrealistic. What to do?

As you find me, I have masked off the letters, and I wait for the fluid to dry. I have plans for charcoal like I did with two of the ‘Commemorative Date Plaques’. I will not darken ‘SMILE’ quite as much though: the background just needs knocking back a little under some filth.

Charcoal flying all over the place, black fingers and grimy darkness. I have gone so far, I can’t turn back now, got to see this through…
Have I gone too far and messed it up?
Posted by Dom at 1:42 pm No comments:

Thanks everyone who voted for my painting. I didn't win - quelle surprise - but I was heartened to find my painting in the top 50 favourite works from the round, so thanks for taking the time to vote.

Buoyed by my relative success, I have entered another painting, and its success lies partly in your hands. So if you can bear to spare a moment clicking the link below and rating my 'SPQR' painting, and adding it as a favourite, I will be very very grateful:
www.saatchi-gallery.co.uk/showdown/index.php?showpic=263651

Feel free to forward this on to anyone else you think might be interested in seeing my work and voting.