[WEDNESDAY 29 SEPTEMBER 2010]
After taking down my exhibition on Monday, I had to catch up with a couple of hours' work.  So I am late to the studio.  I will stay later today to make up for lost time.

I've been werking at the "rock face", gradually building up the pink neon glow again.  I don't do pink much, so it's a case of trying to remember the best mixes of paint, and in the right order.  I set it aside to dry. 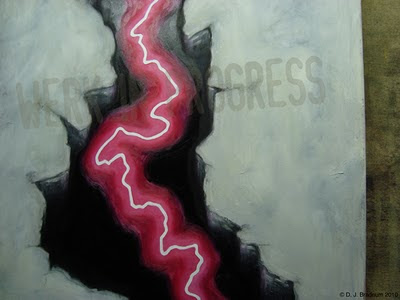 The current top secret painting is still wet.  So I begin work on a new canvas.  A merry hour is spent ripping up bits of cardboard and gluing them to the surface.  I plan to build up a new rock face in relief, with neon glowing out from a pitch dark crevice. 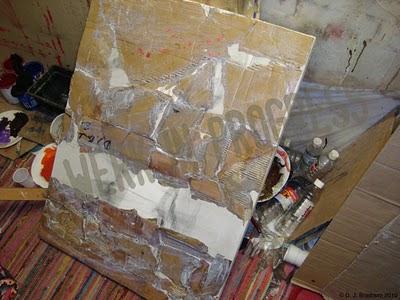 Sometime earlier this year I began a large square canvas watercoloured with Le Corbusier's Unité d'Habitation.  Today this canvas made a re-appearance on the wall.  Out came the masking fluid...  and now it oozes down the surface coating the building in pale yellow goo. 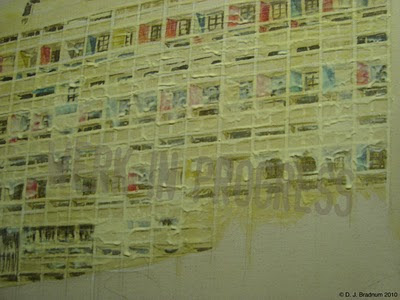 I finish the day with a bit of a clear out.  I find some old canvases my friend Sarah gave me, rip off the old canvas and now I have four small square stretchers to make use of.  I also remove some of the other crap that lurks in the corners of the loft, so that I might have some extra space to store things and to swing the proverbial cat.
Posted by Dom at 12:44 pm No comments:

getting back in the swing

[WEDNESDAY 22 SEPTEMBER 2010]
I had a week off last week to spend with my beloved. But I'm back and there is painting to be done. It's incredible that even after just one week off, it takes me a bit of time to get back into the swing. There have been tentative steps this morning, tickling the white glow of the current top-secret painting.

Everything stops. A rare miniature anteater strolls across the top of the canvas. 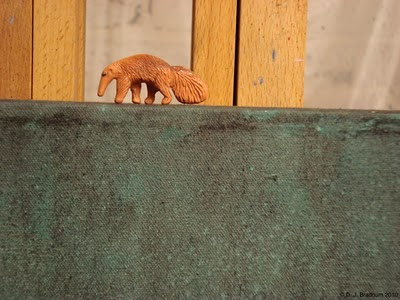 Post-lunch lull: found my way upstairs, and have been at the computer for 24 minutes. Procrastination is a terrible thing. I only came to check the time of sunset (so I don't turn into a pumpkin). Must. Drag. Myself. Away.

Back in the studio. I werk some more on the pink neon path that trickles through the darkness in the crack in the rock face. And then a little more experimentation on the big bad 'NO'. 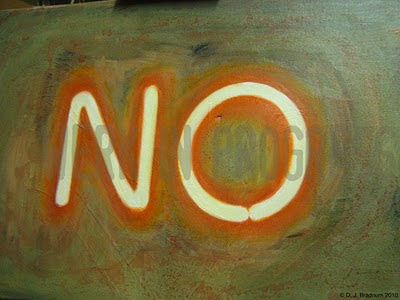 I finish the day with an attempt to make the sinister crow look more realistic. Better. But not completely satisfied. I suspect it is destined to always be just a preparatory sketch. Poor, maligned crow.
Posted by Dom at 11:03 am No comments: 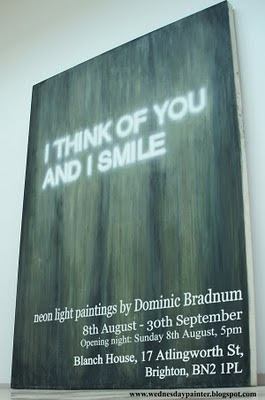 We have entered the final week of my exhibition of neon paintings at Blanch House. Owing to an administrative error (not mine) the exhibition will finish a few days earlier than advertised. The final day will be Sunday 26th September. There will be an informal end-of-show drinks do to celebrate this Sunday between 5pm and 7pm. So if you haven't yet seen the exhibition, or you fancy another look, this is your very very very last chance.

Email ThisBlogThis!Share to TwitterShare to FacebookShare to Pinterest
Labels: Artwerk, Exhibition, I Think of You and I Smile Exhibition, Neon Painting

I received this email the other day marked:
Kind Attn: Dominic Bradnum / Ref: Assistant Artist - Artwork from Images / India
I just had to share it.

I would like to introduce myself as xxxxx xxxxxx from xxxxxxxx, India.
I am an artist making paintings in Oil on Canvas and Acrylic. I can
also provide services in water color on paper, pastels on paper,
ceramics, sculptures, wood, textiles, rugs, metal handicrafts,
embroidery, and reliefs from designs/images as per your instruction.

I specialize in making art from images.

I am in no way infringing, copying, or competing with you as you are
a renowned and a well off artists and I am just an artist making my
livelihood out of it in a far off country thousand of kilometers away
from your country. Moreover, I will be working for you in making more
paintings/art which you can offer to your customers and sell more
and become the best and most sought after artist of your region
and add more creativity and variety in your offering, or in case of
time restraints.

To make you 100% sure of the quality work, I will be sending images of
the painting/artwork during different stages of its making so that any
difference in detailing, accuracy or color scheme could be worked out.
Any inputs from your side or me is properly communicated to give you
the best work. I assure you of hassle free working given an opportunity.

Kindly note I would like to work for you similarly as OLD MASTERS of
Yesteryears like Picasso, Van Gogh, etc. had assistant, the
only difference being they had studio assistant artists and I will be
your outsourced assistant. In this technology advanced world I can work
through images sent by you over Internet and e-mail or may be you
sending postcards and me making paintings out of it.

Further to it, I do understand you may have your own style which
may or may not suit my offering to you.

I assure you of good returns out of this association. Since you are
in the field of art, we can work as long term partners wherein I can
supply you with High Quality paintings / artworks from Images at very
competitive prices.

Sincerely look forward to hearing from your side.

An intriguing proposition. Now I would hardly call myself a "a renowned and a well off artists [sic]", and I'm dubious that Van Gogh and Picasso had studio assistants, but it's intriguing nonetheless. I just need to put aside my pride in my work and my copyright hang-ups, and I could be flooding the market with a load of knock-off fakes/cover-versions of my paintings "at competitive prices". Maybe I could out-source all of my werk and create a whole army of Wednesday Painters, with copy-cat blogs - Wednesday Painter-ism, a whole new art movement.

Email ThisBlogThis!Share to TwitterShare to FacebookShare to Pinterest
Labels: Propositions

As you may have noticed I've been sprucing up the blog with a lick of fresh paint. I've also updated the gallery, and added a more comprehensive selection of my neon paintings.

I feel a bit happier inviting people round now.
Posted by Dom at 2:42 pm No comments:

[WEDNESDAY 09 SEPTEMBER 2010]
8.30am start. I have a date with a top-secret painting. I have one day to make the neon glow. One day to produce what usually takes a few weeks of Wednesday Painting sessions...

Stop. Start. Stop. Start. Stand back and look. Lay down and regard. Back to the easel. KEEP. ADDING. MORE. WHITE. GLOW. There is only so much paint you can add. And still it is not right. I can't see how I'm going to get this finished today. 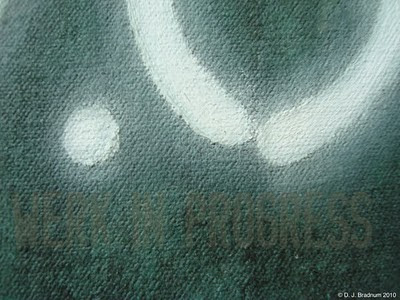 4pm. Still working on the white neon. Still struggling to bring it to a satisfactory state of glow. It is not something that should be rushed. 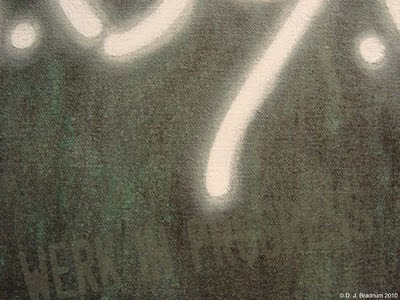 I return after a tea break and conclude that I should mess with it no longer. It will not be ready, it will have to wait. Instead I begin making a card for my beloved. And just after 5pm, I pack up and leave the garret.
Posted by Dom at 10:07 am No comments:

a bit of a spring in my step

[THURSDAY 02 SEPTEMBER 2010]
Yesterday's post was a bit of a lie. I did get some painting done, but only for a couple of hours in the evening. Most of it consisted of running paint and thinners down the canvas: the results were pleasingly fragile and beautiful. 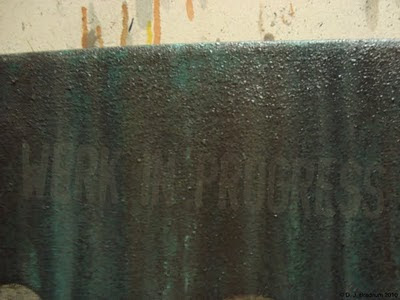 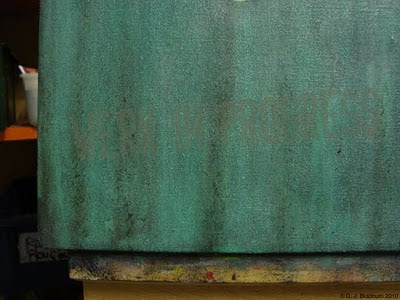 Today consisted of more of the same, with a bit of toothbrush splattering thrown in. I left the canvas with the look of a well worn, patinated copper plaque and a bit of a spring in my step. Next week I turn my attention to the neon.
Posted by Dom at 12:40 pm No comments:

Due to illness and the bank-holiday,
Wednesday Painter-ing is cancelled today.
Posted by Dom at 3:05 pm No comments: