Oh! Wednesday Painter, what have you done?

[WEDNESDAY 30 JUNE 2010]
I've been putting in some extra shifts. I was here on Monday werking away on 'Wish You Were Here'. The reason: it has been selected for exhibition in Southend-on-Sea. Next week!

I have a lot to do, still struggling to make this neon glow work against the seascape. I have taken to werking on it outside. It's been so hot in the loft, plus it tends to dry quicker out in the air, and I can prop it up in the sun during breaks, to speed up the drying process a little more.
It is hot. I werk up close on the orange-y glow... Then some Cadmium Red to bring it out into the surrounding darker reds. Got to make sure it doesn't get too opake... 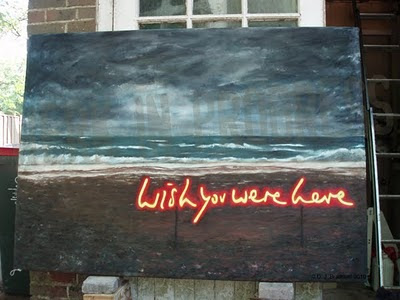 After lunch: I use some chalk pastel to make suggest the spill of the glow onto the beach.
It doesn't quite do it for me.
I add some black ink to the neon's supporting structure. WRONG! Got to knock it back, but it's all too wet, every bit of paint I add smudges the black and makes a mess...
I turn my attentions to the beach: paint and pastels, charcoal, sand, water. Oh! Wednesday Painter, what have you done? 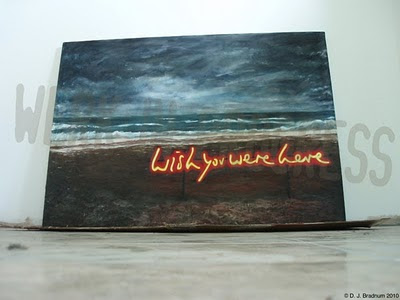 [THURSDAY 24 JUNE 2010]
A bonus day of painting for me. Except half way through the morning I realise I've reached some kind of critical mass: All the canvases I am werking on are at a stage where I need to let them dry/cure/sit for at least a week before I continue.

I spent a good deal of time spreading more paint on the purple drip painting. First Lemon Yellow paint, then blotting it out with black. All this werk is making the canvas more and more slack. It billows like a sail when you hit it at certain points. There is too much distinction between the purple neon glow and the fucked up background. I apply some Ultramarine to the outer glow, werk it in with the purple, and out into the blackness. Not satisfied, but better. 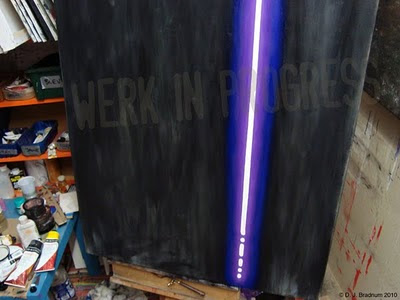 A cup of tea, then I'm back. But what to do now? 'Love is Amour..' has been temporarily retired to the corner. The blue drip is drying. All other canvases are trapped behind wet ones. All I have is this great big 'Wish You Were Here' and it's staring me right in the face. the glow is wet, but the letters are crying out for more paint - cadmium yellow and titanium white - these things take longer than you would expect, painstakingly colouring in between the lines, werking right up close, brush held at an unwieldy height. It gives me cramp and makes my head swim. 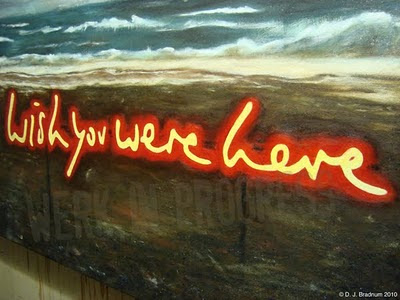 I need a break. I need some lunch. I come back and conclude that the werk I can do here today is done.
Posted by Dom at 9:03 am No comments:

[WEDNESDAY 23 JUNE 2010]
I seem to have been neglecting my duties in keeping up-to-date with this blog. I cannot recall the events that occurred on this day. All I have are photos, and the title I gave this post: 'Knock it back', which suggests I spent a lot of time knocking back the backgrounds of various canvases with black paint and darkness...
What went on? Here are the photos: 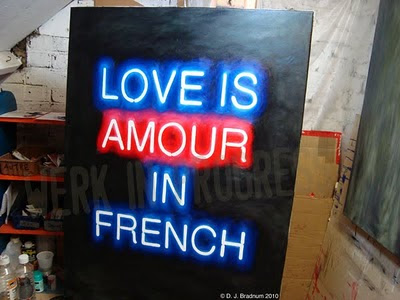 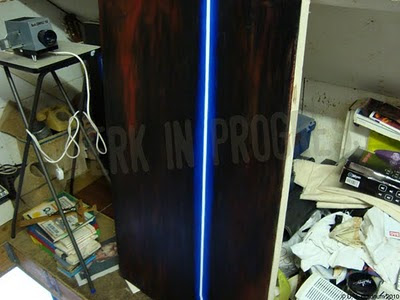 [notice the various studio detritus: a picture of Brigitte Bardot, a crucifix, my trusty little projector, an old telephone...] 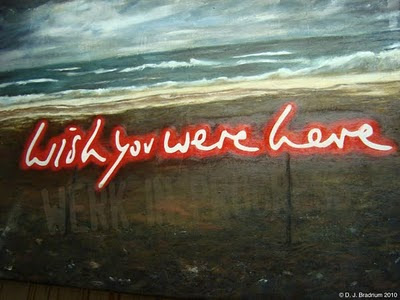 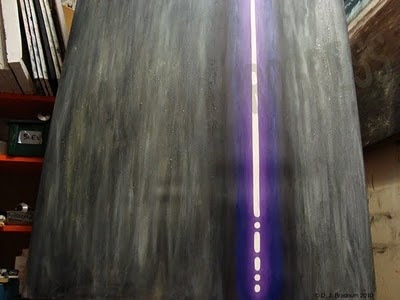 the colour of dairy milk wrappers

[WEDNESDAY 16 JUNE 2010]
Hmmm, not a great start. Woke up late, dragged myself outside. Came back in. And now I am procrastinating here on the internet. IT. MUST. STOP. NOW.

So I werked. 2 hours, deep purple paint the colour of dairy milk wrappers, a phosphorescent drip running down the canvas. 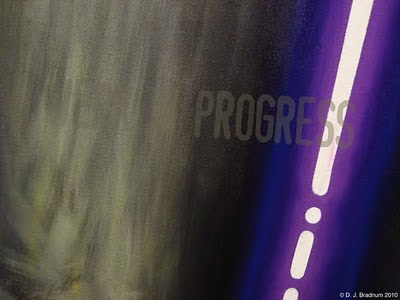 Then lunch. Longer than I should have taken. GOT. TO. GET. OUT. But this crap on telly is too compelling. Another cup of tea...

Back in the loft, what to werk on now? 'Love is Amour...': werk on it now whilst it's still slightly wet, pink highlights around the deep red glow. And then the blue highlights, blending out to magenta, fading out to black. 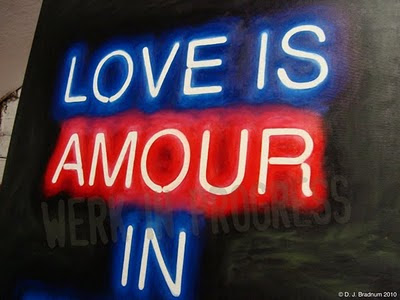 How come I always get on a roll in the afternoon? Just got some time to highlight the blue drip. And then time runs out.
Posted by Dom at 11:20 am No comments:

There is no wrong.

[WEDNESDAY 09 JUNE 2010]
10.15am: I have been searching for things to do in London this Friday. It was not procrastination. It was important research. And now I will make some coffee and head for the studio...

Didn't quite make it out the door. There was perfect light in the extension to photograph '...SMILE' - bright, but a little overcast. I lugged the mammoth canvas down the ladder and propped it up against the wall, went to fetch a camera and returned to blinding sunshine. Aarrggh! Come back clouds I need you!

I waited around drinking coffee and setting up for a good shot. Finally some cloud cover allowed me to snap away. 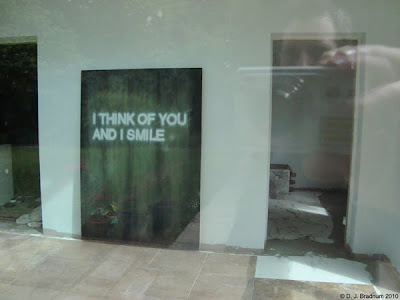 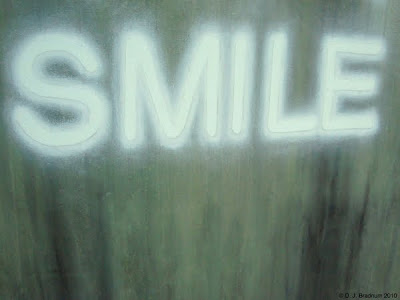 Then my attention was distracted by a shrew running across the floor. It stopped to munch on a dead insect, and ran off when I got close. Spent about ten minutes trying to catch the little fellow so I could let him loose in the garden. Failed. I don't fancy his chances now that the cat has acquired some hunting skills.

Finally went out to get on with some werk, did a spot of colour mix testing, then one of those giant European hornets came buzzing in. At which point I buzzed off, turning all the lights off in the hope it would go elsewhere.

Consequently not much painting has been done thus far. Though I did paint some Permanent Geranium around the word 'AMOUR'. I will do more after lunch.

The afternoon shift was far more productive: Much of my attention was focussed on the meeting of the blue and deep red glow on 'Love is Amour in French'. Something seems to have changed in my painting style. Where before I would systematically werk up a whole layer of colour following the shape of the word/form, I found myself adding paint selectively, and more discriminately, to small areas of glow. Perhaps, in part, because I was using a specific image as reference?

At some point I slapped a load of Lemon Yellow across the dark void of the canvas, something I probably wouldn't have dared do before this new found confidence reared its head. 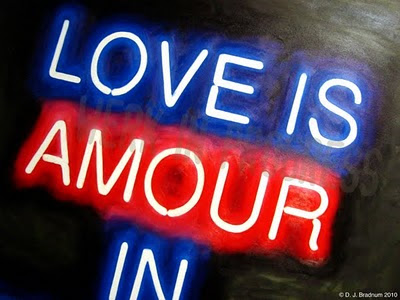 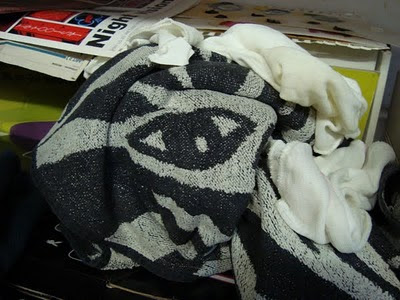 I reigned myself in on 'Love is Amour...' must let it dry a bit before I can werk on it again. I turned to the purple neon drip: more Lemon Yellow, got to build up the paint - I took the decision not to add a final white layer when priming, and it feels like werking on raw canvas - it just sucks up the pigment. Another rash move: tipping a whole load of water down the surface. Confidence rains down in bucket loads and there is no wrong. 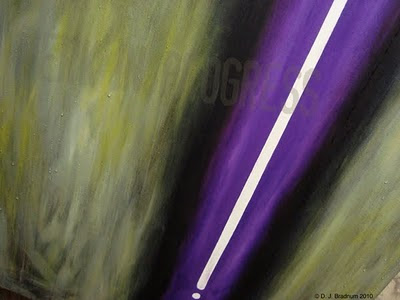 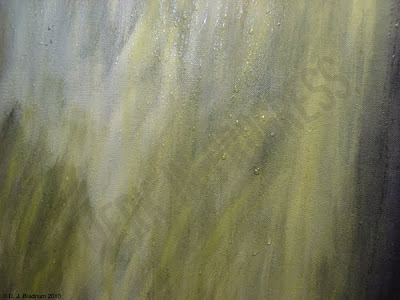 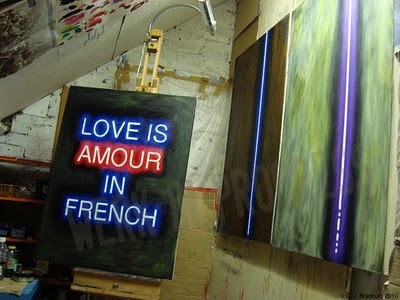 [THURSDAY 03 JUNE 2010]
It is strange being back after 2 weeks away. Well not so strange as difficult to step straight back into painting. I saw so many incredible and beautiful things in Japan and came back with a head full of ideas. And I'm greeted by 3 canvases that demand to be taken in hand.

I do the same with some leftover pale grey/green on the purple drip. It is pleasing to paint without too much thought. 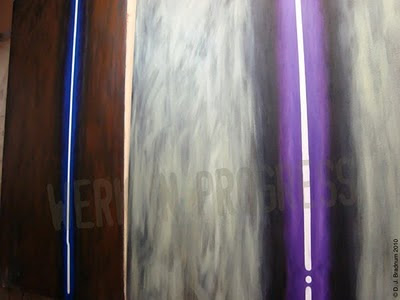 I feel like I'm back in the swing now. I turn my attentions to 'Love is Amour in French' and werk on the blue neon glow. 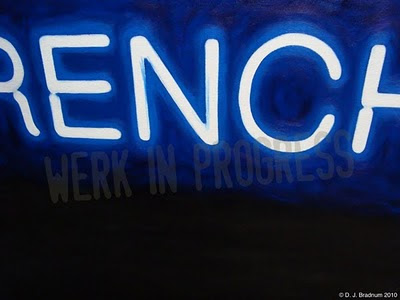 After lunch I pay some attention to the blue drip neon glow, and then back to 'Love is Amour...' increasing the blue glow and bringing in the darkness. It feels like I never left. In a good way. 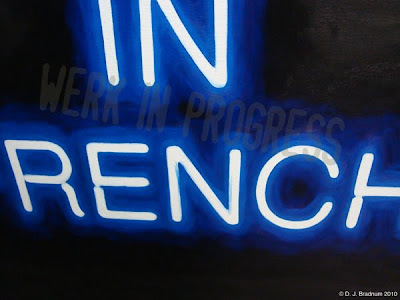 I have just returned from a trip to Japan. Pleasure, not business.

Whilst travelling around I secreted my 'I Think of You and I Smile' cards in places where they may or may not be found, with the idea that they might brighten the day of the finder.

I have a feeling this furtive style of distribution could become a habit...

If you have found one of my enigmatic calling cards, and are reading this, feel free to leave a comment or get in touch.

Wednesday painting will take place tomorrow, on Thursday. Normal werking hours will resume next week.
Posted by Dom at 10:48 pm No comments: