green fingers and a head full of cotton wool

[WEDNESDAY 24 JUNE 2009]
There’s a crow perched on a deep red strip of neon, you can just about trace its sinister outline silhouetted against the dark, foreboding sky. This subject has occupied an industrious hour or so. My view at this stage is that I may need to study the form of the crow a bit more, in order to better capture its character. However this would involve either waiting around in the garden until a crow presented itself, or searching on the interweb for source material. Both of which could take me away from the studio for hours on end. I will take the crow outside and consider it over a cup of tea.

It’s a blustery day out there. The pollen’s getting whipped up off the fields and my hayfever has flared up – cue ten minute sneezing fit.

Not sure what to werk on next. Two paintings are in quarantine, out of sight, in the hope that they will be ready to be unveiled to the public soon; Three paintings are on a fallow week after being werked on last week; Two have been werked on this morning, so they’re being rested for now. Which leaves me with only a couple of options. I should probably stop thinking and just get on with it.

Trouble is none of the canvases I could werk on are getting me particularly fired up, and I’ve set myself a firm rule that I won’t start anything new until I’ve finished some of the 11 or so that I’ve got on the go.

It is 12.29pm. I have cleaned all the brushes I’ve used this morning. I will take a lunch break and hopefully things will be clearer with some food in my belly.

3 o’clock on the dot. I have green fingers, and there’s green neon light glowing fresh and wet on canvas. I have a nagging ache in one of my teeth, having got a bit of foodstuff caught in it during lunch. My eyes are watering, nose is streaming, and there’s an unbearable itch at the back of my throat. I sneeze again... and again… and again... None of this is making it any easier.

For some reason the Pod of i has chosen to play Hotel Blôedel by The Fall every week for the past 4 or 5 weeks. I skipped it last week, because I was fed up with it. I will let it play out this time. But it has been noted.

I’ve done a little werk on the “rock face”, but my head feels like it’s full of cotton wool, and my nose like it’s on fire. I’ve made it through ‘til 10 past 5, I reckon I might just finish up and go inside.
Posted by Dom at 12:44 pm No comments:

Email ThisBlogThis!Share to TwitterShare to FacebookShare to Pinterest
Labels: Confessions

I lost an hour and 20 minutes somewhere in the internet. I only stopped to check what some crap I’d been flogging on EBay had sold for. Got sucked in and paid the price. I’ll never get those precious minutes back. (Though I did sell a nasty, oversized 70’s shirt for 12 quid, so it’s not all bad!)

Before that, I had been patiently werking away filling in those letters again on ‘I Think of You and I Smile’. I mixed a gentle Titanium White with a smidgen of Lemon Yellow, and commenced with the task that is something akin to sign-writing. The next step, post procrastination, was to blend out this wet layer, to produce a serene and subtle glow. It has worked to a degree. 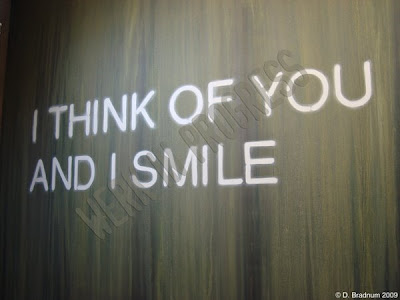 I shall take lunch and give my eyes a break.

Refreshed and fed, I will leave ‘I Think of You…’ for now, so that I can plan my next move. I’m in a white neon mood, so ‘SSSHH’ is up on the easel. It doesn’t quite yet have that effervescent quality I’m seeking, and I don’t think it is within my grasp today. On to the next canvas…

And once again you find me at the rock-face, forming a hair-line crack and rendering a deep magenta glow. Just lying on the floor surveying my werk. A Eureka! moment. I need to add in an extra section of “rock” to bring the composition together. 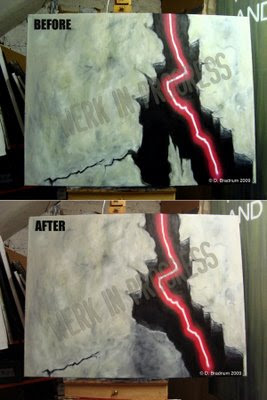 It is time to leave the rock-face, to pack away my tools, and head for home.
Posted by Dom at 6:17 pm No comments: 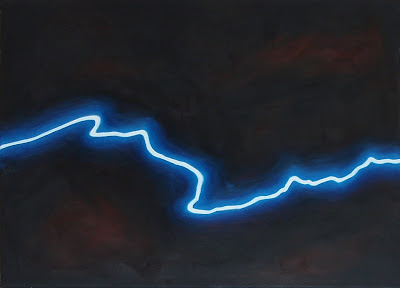 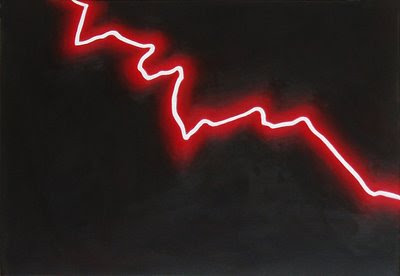 The Path of Least Resistance 2 (red), 2008, oil on canvas, 40cm x 50cm.
A few words about the artwerks:
Neon lights in oil paint, tracing a path of least resistance...
The images could be perceived as:
1. A hairline crack or ruptured fault-line, a sinister glow leaking out.
2. A river channel meandering across the topography.
3. A phosphorescent liquid seaps through the darkness.
4. An electric current surges and strikes out.

You can view and buy these and more of my artwerks, commission free at Saatchi-Gallery/yourgallery and artists.de
Posted by Dom at 5:42 pm No comments:

[WEDNESDAY 10 JUNE 2009]
I power-up the trusty old Mac, it is midday, and I have been a-painting. This new regime of not switching the computer on first thing seems to be a success. It forces me to knuckle down to werk with the paintbrush, rather than pontificating to myself and spewing forth each and every thought on to this computer screen.

It’s been lashing down with rain all morning, but it’s finally stopped – so I shall take this opportunity to adjourn for lunch.

Some post-lunch werk on SPQR and I take the decision to put it aside to rest. I will go back to it in a couple of weeks and then I will know if it is finished. I have also put away another small, untitled, pink neon piece. The feeling is good. Again I must refrain from taking photographs, which I fear may sap the life out of the originals… I would also spend too much time poring over them and finding faults. No, they need to be kept out of sight so that I can see them with fresh eyes in a few weeks.

My knees just let out an almighty crack in protestation at my crouching down for too long. I have been werking on the fourth canvas of the day, and I feel another will be up on the easel before long. This one has sat untouched for so long I have had to brush off a layer of dust and fluff.

Rather than embarking on something else, I’ll use the remaining time to give some brushes a much-needed deep clean. Oh, the drama!
Posted by Dom at 11:09 pm No comments:

Email ThisBlogThis!Share to TwitterShare to FacebookShare to Pinterest
Labels: Confessions

Meanwhile, at the rock-face...

[WEDNESDAY 03 JUNE 2009]
Half-an-hour late opening up, powered up the sound-system and commenced werk – painting over those white neon letters again, building them up to a brilliant white.

This kept me occupied right through ‘til 11.30, when I took a break and took SPQR out into the daylight. I was quite pleased with what I saw. The neon sings out, and the purple glows a luxurious intense violet. Just a few areas that need the lightest of werk and it should be finished. Yes, you read that word right FINISHED.

And I have only just switched this old computer on, to make my first entry. It is 12 noon.

Another hour of whiting-out, now lunch.

And back again. Bringing more darkness in, black oil paint all over my grubby mitts. Maybe I should go back to werk on the rock-face…

You find me at the rock-face, chiselling away, rendering 3-D physicality around pink neon. 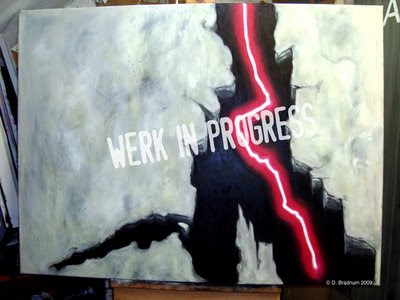 And on to the next one – more darkness and more pink neon. 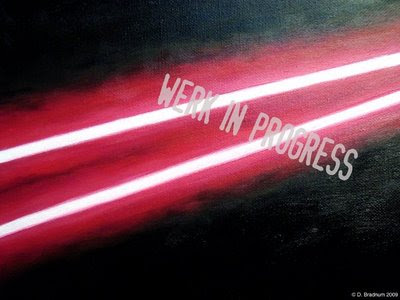 And finally, some blacking out of peripheral edges…