one step behind the zeitgeist

[WEDNESDAY 25 MARCH 2009]
I wasted some time this morning making a secret lo-fi video. That probably sounds more dodgy than it actually was. As you can imagine, my camera work is about as professional as my photography, so the results will undoubtedly be ropey as hell.

It was mainly just some shots of this hole I call a studio, with some deadpan commentary over the top. How’s that for a pitch?

There has been slow progress on this canvas – I’m working on a “lean” layer. This entails quite a bit of delicate brushwork, blending edges to make them glow. It is painstaking, but necessary, work. And it threatens to drive me over the edge. 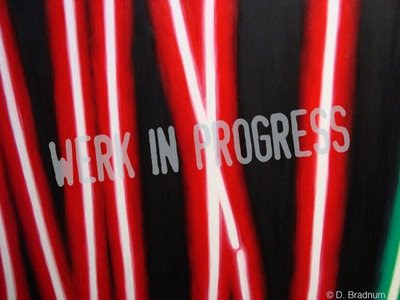 The high contrast of these stripes is messing with my peripheral vision. Need to keep taking eye breaks or I’ll give myself a migraine. And the turps fumes aren’t helping much either.

The Pod of i has got me painting to MGMT – I fear I’m always one step behind the zeitgeist. It’s good painting music though, so I’ll get back to it.

And relax……………………….. I have completed that arduous “lean” layer with a few last strokes of Permanent Geranium colour. I’ll have a cup of tea to celebrate. 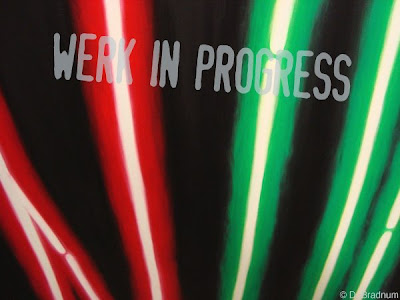 1. It’s a glorious day outside.
2. The birds are chirping up a beautiful cacophony in the garden.
3. I have eschewed the thermals for the first time this year.

Yes it is a glorious day out there, and here I am in my window-less loft, hoping the early chill will soon be displaced by the joys of spring scuttling up the ladder.

On with the show…

[note to self: film the days travails, then speed up the footage. Post it on YouTube. Dispel the myth of the artist, by showing every step of the process. Imagine the viewing figures: Zero.]

On with the show…

As if to perpetuate the overall feeling of goodness, the Pod of i has been selecting some choice music to soundtrack the moment: Bubblegum by Kim Fowley; two Belle & Sebastian songs in a row; Range Life by Pavement; Stereo Total; Dusty singing about The Windmills of Your Mind. It’s all sweet, sweet music to my ears.

In a bid to spoil the party, along comes Mark E. Smith with a curmudgeonly retort to all this gambolling-lamb joie de vivre.

11am: A quick cup of tea and some sunshine to warm me through.

As well as a preoccupation with neon, I must confess to having a deep fascination with rust, mould, decay, and anything that looks distressed. This is probably rooted back in my foundation year, when I spent a lot of time shivering under Worthing pier, sketching and taking photos. I tend to romanticise the fragility of battered and weathered artefacts, and find myself attracted and repulsed by their decomposing patina.  Hence I am compelled to take photos of things like this: 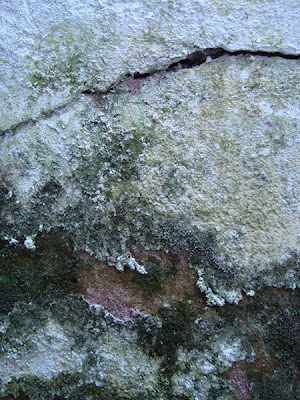 This explains why I was in heaven breathing in the lead-fumes and poring over the topography of Kiefer’s monumental canvases and loitering amongst Richard Serra’s lurching slabs of weathered steel on a trip to the Bilbao Guggenheim a year or so ago. 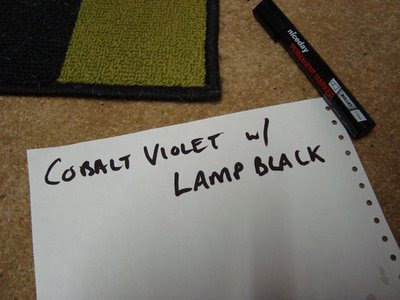 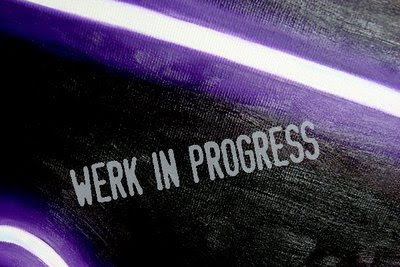 Neon Painting: You Give Me Fever

This is another werk from the first set of neon paintings I produced after picking up the brush again in 2006. It was shown in 2 exhibitions in Brighton and Hove, and someone took a fancy to it on its second showing. It has long been gone to a loving home, leaving only photographs and memories.

Here are some photos taken in-situ, against the [accidentally] kitsch wallpaper that covers the walls in our flat. 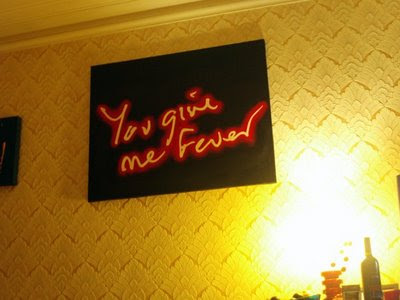 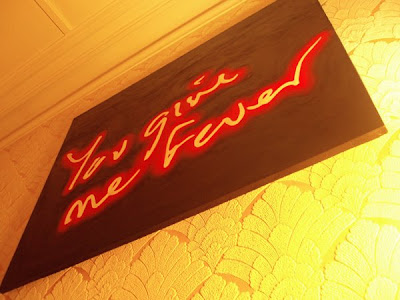 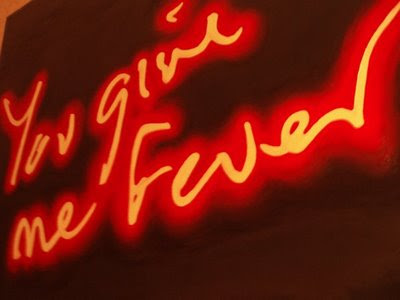 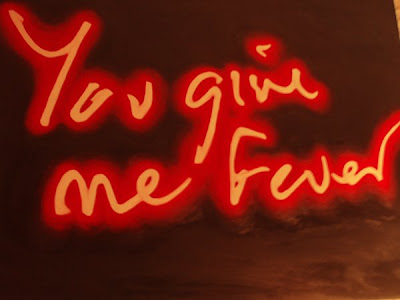 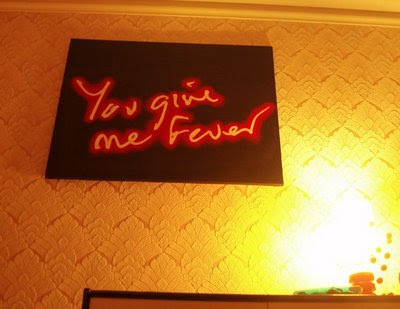 You can view (and buy!) more of my werk at Saatchi online and Artists.de.

Email ThisBlogThis!Share to TwitterShare to FacebookShare to Pinterest
Labels: Artwerk, Neon Painting, You Give Me Fever

'The Artist' and 'The Process'

[WEDNESDAY 11 MARCH 2009]
It is 1.45pm, and I have made it through ‘til after lunch before even looking at this computer. Pats-on-the-back all round.

I have been working with great purpose, in contrast to last Wednesday, when… Well you know what happened last time...

I feel a lot more comfortable in my role as ‘the artist’ today. I have been reading Roxy by Michael Bracewell, and getting all nostalgic for my art school days, which has awakened my thirst for ‘the process’, and given me a much needed fresh impetus to create.

I propped this canvas on the easel, determined to bring it towards some form of completion. 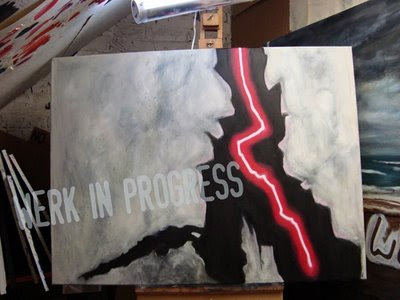 And when I’d finished: 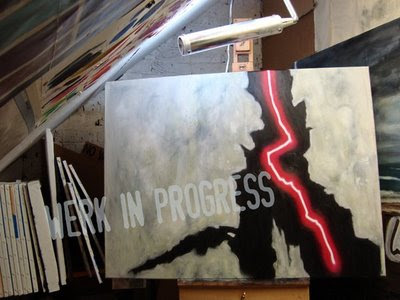 the iPod is running low on juice, so I’ve resorted to the wireless – 6Music, Adam Ant is on. This is a good thing.

Wildlife watch
Earlier, I stepped down the ladder for a breath of fresh air, and discovered 2 ducks looking round the garden. “There ain’t no pond here.” I told them, and they looked a little confused, and left. 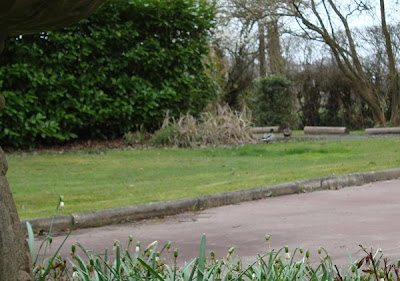 3.45pm: I think I deserve a tea break whilst I contemplate my next move.

Injury count:
So far today I have cracked my shin on the ladder, giving me a nice bump and graze just below my knee. I have also smacked my head on one of the low beams of the pitched roof. The hazards of working in a cramped loft-space are many – though I have, thankfully, not yet taken a tumble down the hatch, despite my vertigo tempting me and taunting me every time I venture near.

Now you may be thinking: If you have vertigo, why loiter near the edge?
Here’s an explanation, in someone else's words:
“What is vertigo? Fear of falling? Then why do we feel it even when the observation tower comes equipped with a sturdy handrail? No, vertigo is something other than the fear of falling. It is the voice of the emptiness below us which tempts and lures us. It is the desire to fall, against which terrified, we defend ourselves.”
Milan Kundera, The Unbearable Lightness of Being. (1984: p56)

And now, it’s almost time to go. I’ll clean up the brushes, and clean my grubby hands, then I’m ready to catch the train to take me home to see my wife and cat.

Today has been a good day.
Posted by Dom at 5:24 pm No comments:

[WEDNESDAY 04 MARCH 2009]
It’s been a slow, distracted morning – delicately faffing paint over an existing layer. Trying to achieve that luminosity and effervescence that is my goal.

“Be bold!” I tell myself.
“Don’t spoil what you have already laid down.” A nagging little voice whispers.

I have just taken a sip of Herbas de Menorca. It says it is chamomile, but has more of a mellow anis taste to it. It is 12:09pm.

I have eight brushes on the go, 2 palette knives and 4 colours (Emerald Green; Ivory Black; Titanium White; Permanent Geranium). The second canvas of the day is propped on the easel. It is time to be bold…

I can hear mice scuttling around in the insulation space overhead. I’ve begun correcting my spelling and grammar. Get back to work.

I’ve done something… Fuck knows if it’s the right thing. But it is something at least. Now would be a good time to take lunch and take stock.


There’s a wall at the side of the house with an almighty crack running through it. It looks like it might fall down any minute. I take a photo for reference and for prosperity. 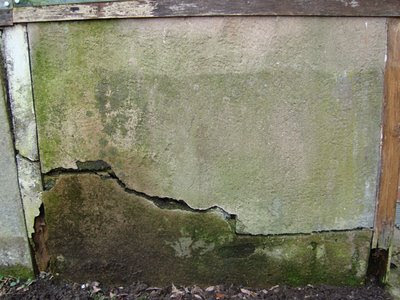 Surveying this loft-cum-studio I can see that I have no less than 13 unfinished paintings (that is, ones where I have actually committed pigment to canvas). It is troubling to me that this scenario has arisen. I don’t think it’s necessarily a lack of will to finish, rather a lacking in confidence to boldly move forward with these things to bring them to a state of completion.
I find I have no trouble starting things – not for me the blank-page (canvas) syndrome that holds so many creatives in their tracks. I’ve stepped into the breach 13 times on 13 canvases, and then got lost: Lost in the process; lead down a blind alley only to realise I don’t have the spunk to make my way out the other side.

I can pen bold statements on this here computer – they can all too easily be erased. But the bold painter seems to have deserted me.

Before lunch, I had a sickly urge to take a knife to this canvas. I took it outside, where I spent a lot of time staring daggers at it, a prodigious flow of tourettes-words gushing forth in the daylight. The birds evacuated the garden, the neighbours shut the windows, cute bunnies scuttled down their burrows…

I can see now that the something I did before may not have been quite right. But it was also not wrong.

I should probably werk on something else for a while. Load up the third canvas of the day –SPQR – and open the cobalt violet.

As I paint, I regain composure. Sucking on a Halls clears my head, and I know that this preoccupation with timidly inching forward is a ridiculous way to werk. I know that whatever wrong is done can be rectified later, in fact maybe there is no wrong, and everything is part of the process. I can tell myself that if I do something rash, like scrawling a giant schoolboy prick across months of hard werk, it can be painted over, buried under another few layers of paint. But the problem I have is that this would put me back another few weeks, going over the ground I have spent many hours toiling to create.

It’s a futile business if you look at it like that. So I’ll just get on with it.