Good news received yesterday: my painting 'I Think Of You And I Smile' has been shortlisted for the Fringe MK 2010 Painting Prize.
100 paintings have been selected from all the entries and these will appear in the exhibition catalogue. Works will be chosen from this selection to be shown at the exhibition, and a final four prize winners will be selected in July.
You can see my motley canvas, and the competition, on the Fringe MK facebook page.

In other news, I had some business cards printed (coincidentally of the same painting) and they arrived this week. 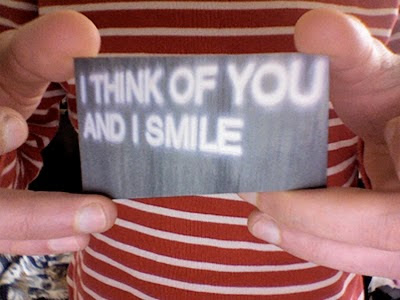 Email ThisBlogThis!Share to TwitterShare to FacebookShare to Pinterest
Labels: Competition time, Tools of the Artist

[WEDNESDAY 12 MAY 2010]
I just couldn’t wake up this morning. It is 10am, I have just climbed the ladder to the loft. I’ve had to put the little heater on to take some edge off the morning chill (yes, it really is May). Right: drink tea, pick up brush, squeeze paint, get on with it…

11.10am: tea break. I return to the familiar aroma of turpentine. It lingers with the taste of hot tea on my tongue.

By 12.20pm I was craving lunch. I made the mistake of checking my email. 40 minutes of internet procrastination later and I’ve still not eaten. Coffee, cake, cheese on toast, I switch the TV on to find the Lib-Dems are officially in bed with the Tories. I wonder if Nick Clegg will move in to no.10 as well. He could take the left side and Dave the right: Sit-Com gold in the making…

Back in the loft, painting reds and blues. ‘LOVE IS AMOUR IN FRENCH’: the words spelt out on this canvas, Permanent Geranium paint on the brush. Pavement is on the STEREO-O.

3.30pm: I’ve had this dull stabbing pain in my gut. I decided I’d feed the blighter and have a break from the turps fumes and paint brushes. Watched ten minutes of Countdown and pleased myself by getting the answer to one of the ‘numbers’ rounds (both of the contestants were 1 out! Smug face!). Fed and stimulated I trudged back outside.

It’s amazing what a load of black paint can do. I’ve filled out the blank space with darkness and it’s beginning to take form. It still looks pretty sketchy, but we’re on the way. That gnawing in my gut is still there, not helped by the chemical taste on my tongue. I do wonder if this is doing me harm. I do have ventilation in that there is an open loft hatch with an open door at the bottom. But there’s nothing to actually extract the fumes from in here.

I go outside for some air, then come back to clean all the used brushes. 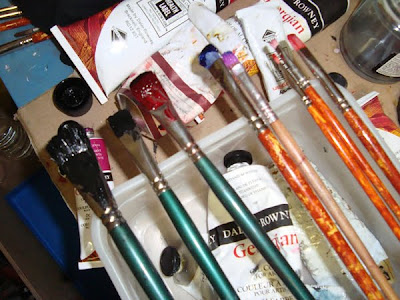 Today hasn’t been the most productive day. 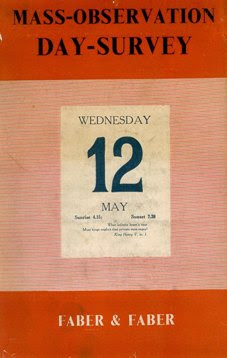 I have had to leave the loft temporarily whilst the fumes abate. I found an old bottle of Rustin's Pure Turpentine (circa 1970s, I would guess). 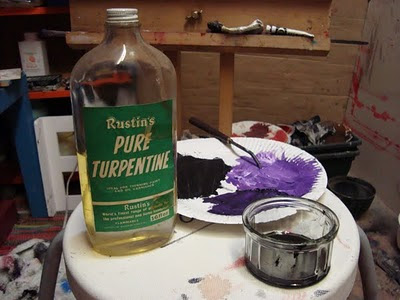 Christ they don't make it like they used to! A good vintage? Depends which way you look at it: If you like your turps fumes to spread thick and fast, and to make your head swim and linger on your tongue, then this is definitely the one for you; If, on the other hand, you prefer to keep lucid whilst you paint, the ol' bottle of Rustin's is a bad idea.

Wednesday Painting will re-commence after this short lunch break.
I return to find the stench of turps is enough that I'll be high all afternoon unless I don some kind of respiratory aid - I fetch THE MASK (a 'tool of the artist', occasionally required for health and sanity purposes). 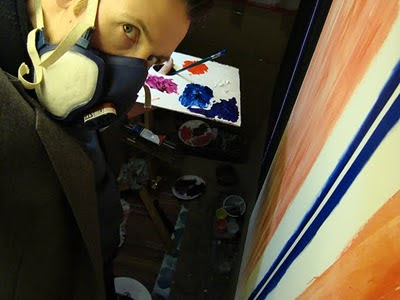 This stage of the painting is all about getting pigment onto the canvas and building up a base layer. It's relaxing to werk unhindered by hang-ups and to just paint and paint. It is also physically hard werk. I resort to standing on the stool to reach the top of the canvas, then sitting down for the lower quarter. 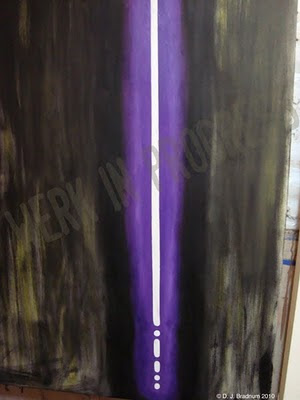 I add another layer of paint over the blue and red glows of 'LOVE IS AMOUR...' and also to the blue drip, a mixture of Phthalo Blue and Titanium White. It feels good to just PAINT.